Why Raheem Sterling is the perfect ambassador for ‘new’ Gillette

Gillette has a long history in sports marketing. But recent years have seen a dramatic shift in the way the P&G-owned grooming brand has executed its marketing strategy, not least through its approach to sports marketing partnerships and positioning.

According to Gillette CEO Gary Coombe, speaking backstage at the Leaders Sport Business Summit in London in October, the company now looks for partners whose values are ‘congruent’ with those of Gillette.

In the short video interview, Coombe explains the thinking behind the shift in marketing positioning, and the process of making it happen, a process that had, at its core, a belief that consumers “expect brands to deliver something more to society than delivery of a functional benefit.”

The new Gillette – the best a man can be, rather than get – requires a new type of brand ambassador; an ambassador who is preeminent in their field, but one who also makes a contribution to society through the upholding of a set of values. And that, according to Coombe, is exactly what new Gillette brand ambassador Raheem Sterling brings.

Coombe announced the new endorsement deal at Leaders in October, and Sterling’s first piece of work for Gillette was launched earlier this month.

Using football as a platform for inspiration and mentorship, ‘Made of What Matters’, features a short film that highlights Sterling’s contributions on and off the pitch. The campaign includes a partnership between Gillette and youth education charity Football Beyond Borders.

Gillette Stadium is home to the New England Patriots; one of the NFL’s most successful-ever franchises.

How Anheuser-Busch used sport to dominate the US beer market 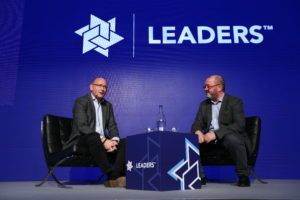 How to maximise the value of branded content in 2022

Leaders Special Report: The Rise of the French Sports Industry

Lessons from Leaders: What Leaders Week London told us about 2019

More from the Intelligence Hub

Leaders Digest: Apple beefing up its sports team; the IOC smartening up its hospitality game

Leaders Digest: Amazon turning on another money tap; Ball waxes knowledgeable on media again; and Richard Scudamore gets to work.

Kate Bosomworth – How do you manage?

George Woffenden – How do you manage?

Emily Caroe – how do you manage?

Jeff Slack – How do you manage?

Leaders Digest: A golden rule for presenting, the noise around audio, and the next spender in sport

Nathan Hines – How do you manage?

Leaders Digest: Clubhouse, GameStop and the financial implications for sport.