Andrea Radrizzani reflects on his time at Leeds United thus far; the challenges of football ownership; and plans for Premier League promotion.

Andrea Radrizzani made his fortune selling the rights to broadcast football, particularly the Premier League, all over the world as Co-Founder of MP & Silva. In 2017 he chose to spend a sizeable chunk of that fortune on rescuing a historic club who have been outside of English top-flight football for well over a decade, Leeds United FC.

He is also Founder and Group Chairman of Aser Group, the umbrella organisation for Eleven Sports Network, the streaming service which operates in a growing number of territories and launched in the UK earlier this year.

In this short interview, recorded backstage at The Sport Business Summit, London in October 2018, Radrizzani reflects on the past 18 months as the sole owner of Leeds; discusses how he copes with criticism from the fans and the media; and gives a little preview of the celebration plans should the club be promoted into the Premier League for the 2019/20 season. 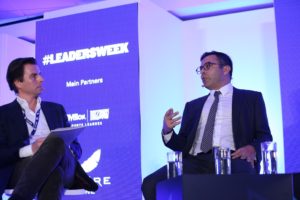 How to maximise the value of branded content in 2022

Leaders Special Report – Women’s sport: bouncing back from the pandemic

Leaders Special Report – ‘Owning the fans’: What does it really mean?

Leaders Special Report – Broadcast Technology: The state of play in 2020

More from the Intelligence Hub

Broadcast Disruptors Bulletin: Why sport should look at original scripted programming; the ICC view on India’s thriving media market; and what happens now MLS has sold its global rights

Broadcast Disruptors Bulletin: How W Series reset its broadcast strategy; pressure in the subscription system; and Bill Simmons takes the reins at Spotify

Broadcast Disruptors Bulletin: The case for Channel 4; the place for FIFA+; and the changing face of Bundesliga matchdays

Broadcast Disruptors Bulletin: Solving the Olympics’ discovery problem; Barstool goes live on the way to the moon; and why sport should be keeping an eye on CNN+